The moon was angry last night. It turned red. If you happen to miss the news, we had a rare coincidence of two reasonably normal events: the moon was at the closest point in its orbit; and there was a full lunar eclipse, producing what we call a “blood moon” because of its red color.

While originally I was planning on finding a good spot to scout it out, I stumbled upon an organized group at the University including some people from the astronomy department and also the local astronomy club. They had all sorts of telescopes and computers and equipment and knowledge. I had lots of fun interacting with people (people make all things better, right?) and even bumped into someone I had met at a programming meetup. 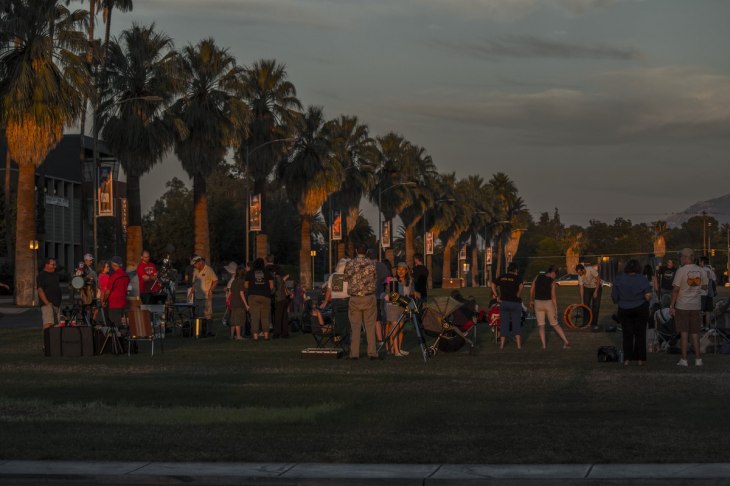 Getting prepared for the moon watching. The astronomer from the university had telescope pointed at the sun giving early-birds a chance to see the hot surface.

One goes down, one comes up.

The moon peeking over the horizon – a moment of excitement for everyone who came, after lots of waiting.

Probably the most awe-inspiring time of the night was seeing the partially-eclipsed moon rise over the mountain.

Everyone gazing at the moon: some just laying down next to each other on a blanket, others chatting and catching up, still more teaching curious children about the heavens. This was a successful community event.

These guys telescope packs compactly and makes for a great portable viewport into the sky.

An image stack of 32 images taken in sequence of the blood moon. It isn’t as good as I was hoping it would be, c’est la vie