After visiting with family over the Christmas break, Mandi and I drove out to Omaha to spend a few days with our friends Andrew and Sarah and their two little boys. To our delight, they brought home the newest addition to their family just before we arrive: Missy, the Schnauzer.

Still small, Missy fits like a play football in your hands.

She’s a great dog for the kids (and Mandi): loves to be held but energetic and happy.

Missy does have issues with boundaries, as seen here by her insistence on kissing Mandi.

It was lovely to relax for a few days and hang out like we used to. Andrew and I used to have more opportunities like these when he lived in Chicago and I lived in Indianapolis.

With Mandi there this time it was easier for Andrew and I to get away together. Sarah has always been generous with me stealing away Andrew when I visit, but it’s hard for me to ask to do so because I know it’s like asking if we can go play while she takes care of the kids. I’m really thankful for that time, though, and knowing that Mandi was willing to help out made it easier.

Even those of us without kids know that it’s life-changing how different kids make things. When I spend the time with them I’m reminded of how little I have to think about things like eating, going to bed, doing house-work, etc… On the contrary, it can noticeably impact Ezra’s and Micah’s moods if they don’t eat at the scheduled times and they seem to fumble around with their bodies and expressiveness as they figure out how to say they’re hungry, just as missing a nap or going to bed at the wrong time can have frustrating consequences. I admire the effort parents put out to bring that needed structure and security in their kids’ lives (and clearly I have none of the structure in my own).

That late-night light-bulb illuminated the lounge
where we laughed and lingered while the little ones
were lulled in their beds and the chill of the winter
was knocking on that lounge door,
was knocking and calling but we couldn’t hear
for the light of that lamp which was warming our spot
in the corner of that lonely lounge
was all that our fascinations were fixed on as we
sat and sipped and shared tales
of the times that we missed
and the times that were yet to be.

We got out into a place called the Old Market in downtown Omaha a few times which was really fun. The city reminded me of Kansas City. He was able to show me some of the places from his childhood which were part of who he is and which are special to his family. He took me to the Drastic Plastic record store and to the Beansmith up the street. We sat and had good conversation right across from the old brick buildings lining the paved-brick road.

In fact, one of the buildings we sat across from had seen its last Christmas and wasn’t going to see another. In 7º F temperature, it burned up just a few nights after we left. Andrew took some amazing pictures of the beatiful remants the following morning. Water sprayed on the building to quell the flames froze before it fell to the ground. If you click on the picture it will take you to his full gallery, and it’s worth a view. 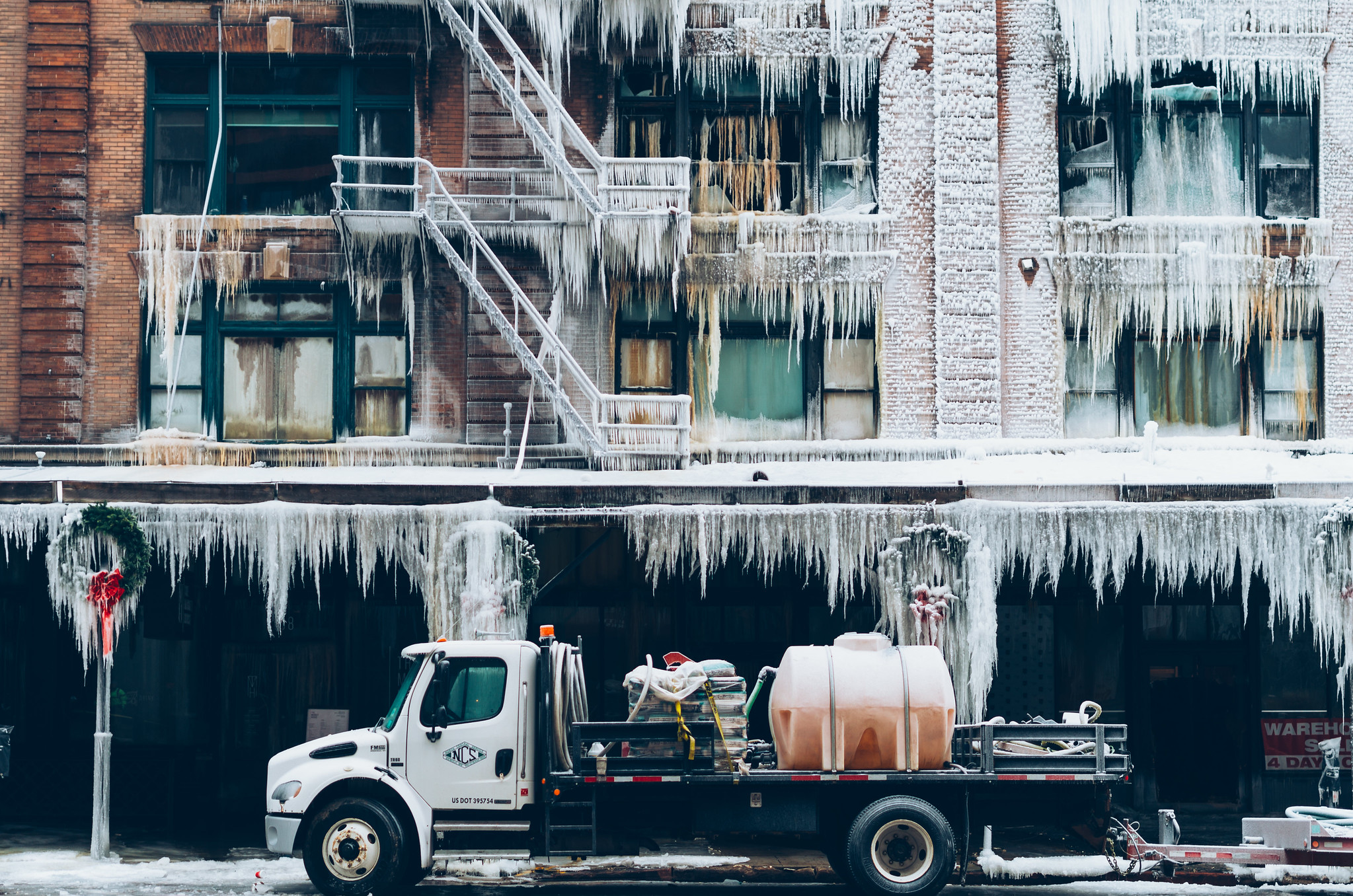 Eventually Mandi and I had to leave. The 7º F chill wasn’t exactly holding us back either. We packed up, took a 4:00am lift to the airport, and came back to sunny Tucson after having been gone for weeks. Her luggage was destroyed in transit and we are waiting for a replacement from the airline. Overall we had a good vacation, but it’s really nice to be back home and back into my routine. I hope you all had a nice Christmas and New Years and had a chance to spend some time with some great people too.

Mandi doesn’t like to take escalators, but I did here, which is how I got to the bottom in time to capture this shot of her smile.

Every new surface is a new opportunity to explore photography. This is the ceiling of the Omaha airport terminal.

Our year is over and we’re heading home now. It was quite the time, a time of fun, a time of challenge, a time of change. The past week has been full of preparation to leave: last meals with friends, packing, one more stop by the cafe, packing, organizing travel plans, packing, you get the picutre. Now I’m en route and this one is going to be a doozey; can’t wait to get home.

END_OF_DOCUMENT_TOKEN_TO_BE_REPLACED

For a weekend that I anticipated would get a little lonely (Mandi had to stay home and teach), I am so thankful to have made some new friends.

My journey took me ultimately to Bratislava where I attended a WordCamp – a community gathering of WordPress users and developers. It was the first time I have publicly spoken at such a conference and I presented on mature software development practices. As usual, I chose adventure over convenience, which means that I took the sixteen-hour-long bus ride and stopped over in Vienna and Dresden along the way, taking random turns as they came.

Slovakia left a a fond impression in my heart when I first visited in 2009 and I was excited to return. This time I didn’t get to explore the country, but I was able to see most of the different parts of Bratislava, something I missed out on before. The people I met were wonderful hosts and just as friendly as I had hoped for. They did a wonderful job planning and organizing the conference.

Juraj Kiss, also an organizer for the volunteer bike share program in Bratislava.

On the Contributor Day several of the Slovak community members and I worked together to try and improve the core of the open-source side of WordPress. We learned quite a bit and enjoyed conversing with each other.

…and these were just the leftovers!

I also got to know some of the WordPress folk whom I met in London but was too busy to hang out with. Jenny, Rob, Petya, and Noel work for Human Made, another fully-distributed company, and are currently in the middle of a road trip across Europe, from Sofia to Barcelona.

This clan of WordPress enthusiasts welcomed me into their tribe for the weekend and we had lots of fun eating together, watching a movie, and chatting about work and life.

When I overheard that they were also going to stop in Vienna after the conference, I told them that I too was going there and suggested we find a common place to work, but they took me by surprise when they said that they had extra room in their car and and would take me with them. So despite having already paid 9€ for a bus ticket, I gladly accepted their offer and had a blast all the way.

One of my coworkers in Vienna helped us find a conference room with power outlets and great WiFi. The group from Human Made continued their journey after lunch and I continued to work with Paolo. This morning we reconvened but at a new cafe while Luca and Alex, two more of my coworkers, also joined us. We ate together and discussed ridiculous fees from the telecoms in Germany/Austria, photography, and the nomadic lifestyle.

Discussing bureaucracy can be almost as crazy as dealing with it.

During the intermission between these mini meetups, I found myself in a room full of American exchange students from Ireland. Although I had planned on roaming around the city through the night searching for good night sights, we were all tired and I ended up playing cards with my roommates, chatting, and going to bed early. I was so glad I chose to stay in the hostel instead of a hotel – I would have been all alone in a sterile room and missed all the fun (and sleep).

John, not a moran as his Twitter handle (@moranjohn) suggests.

Ally with dat lovable ‘Sconsin accent and her friend Bridget

Now I’m on a bus back to Hannover and my short trip will soon be over and I’ll be glad to be back with Mandi. It was a pretty roller-coaster weekend for me, really: a mix of the joy of social interaction and the sadness of being in a crowd of people and longing for a pal.

Coincidentally, while walking around Vienna, I came across this stone artwork but couldn’t see what it actually was – just a big oddly-shaped chunk of stone in the middle of a busy court. It looked like it might offer a good vantage point for taking a picture, but when I climbed on top, I saw the whole picture and just about cried.

You couldn’t see the words without climbing, meaning that just about everyone who walks by probably misses it. Right there, in the middle of everyone and everything you stand alone – even in the heart of this metropolitan hub – and no one notices.

I feel like the friendships that formed were a gift from God who knew how low I would be feeling and I’m incredibly grateful to everyone who was a part of it. What might have been a terrible weekend was an amazing time that reenergized me and reminded me of my days at Purdue.

It’s all about the people.