If you read my last post about the European debt crisis and missed the linked article (at the current moment it has been taken down for copyright reasons), I am going to try and summarize the gist of it here.

Warning: This article has no pictures! END_OF_DOCUMENT_TOKEN_TO_BE_REPLACED

Update: Dear readers – the article I read and linked to in this blog post is currently down while the author attempts to navigate copyright legislation. It was a translation of an article that appeared in DIE ZEIT (the times) and I assume they contacted him for publishing the translation without permission. It’s still a good read (even better maybe) in German, but if that’s not your cup of tea, I will try to post a second update when and if the English translation appears again.

As usual, it’s easy to quickly dismiss a perspective that doesn’t fit into our own narratives and belittle or enfranchise those who disagree. As a European outside, I enjoy a certain distance from the issue of sovereign Greek debt, but the issue permeates the news around Europe.

The following article throws a wrench into the strong banter between Greece and Germany. These two countries are looking at the same issue and have developed extremely different interpretations. In fact, there’s no rational way to reconcile their differences: Germans claim that Greeks are whiny and lazy while Greeks claim that Europe is trying to humiliate them.

I’m always prompted to take caution in a matter when people hold vastly opposing interpretations. Although it would be nice if were some formula that could be applied to solve this, none seems to exist (or at least none seems readily accessible or agreeable). We as people seem to be a little willy-nilly in handling things like this, all too often giving the preference for those best able to handle it themselves and withholding from those most needy.

This is a complicated matter and I don’t mean to imply that Greece should be handed a few hundred billion Euros by linking the article. It should make us step back and ask lots of questions before framing our understanding, however.

Our year is over and we’re heading home now. It was quite the time, a time of fun, a time of challenge, a time of change. The past week has been full of preparation to leave: last meals with friends, packing, one more stop by the cafe, packing, organizing travel plans, packing, you get the picutre. Now I’m en route and this one is going to be a doozey; can’t wait to get home.

END_OF_DOCUMENT_TOKEN_TO_BE_REPLACED

Finally, after three weeks of being apart, I made my way home to Mandi; it was an exciting reunion.

I had fairy comfortable travel, starting with the gate agent in Indianapolis checking my backpack all the way to Hannover, which meant that I didn’t have to carry it through New York and London. Then, when I boarded the 777-300ER, my seat had been changed from what I selected online, but since the plane wasn’t full, I was able to take the seat right behind one of the galleys. This was a great seat because there weren’t any seats in front of me, there was more leg room than I could use, and the seats next to me were empty.

The trip did wear me out, however, and it took me a couple of nights’ rest to recover. Mandi has taken me on a tour around the city and we already took a couple of trips to IKEA to plan some improvements to our humble little home in Hannover.

Thankfully, I was able to get my registration completed in just about an hour and a half at the Bürgeramt, but that is only because I got up early to try and be first in line – I was eighth in line coming a half-an-hour before they opened, but those who came at the opening time ended up waiting behind about a hundred people.

So, what a rush of two days! I mean, three days, because I’m writing this from the train bound for Berlin in order to catch a flight to Bulgaria! This weekend is WordCamp Europe, the conference put together by the European WordPress users’ group. Because Mandi has to teach, she is unable to come with me now, but she will join me tomorrow in Sofia where we will stay until Monday. This will be the first WordCamp that I have attended, and I’m excited to see more of the community that makes WordPress such an open and democratic platform.

When you arrive in Germany, you have six days to register with the residence bureau, which is open two and a half hours per day, except on Wednesdays, when it is closed.

You can wait in line to register at the bureau, but they will tell you to make an appointment. The office is open one hour per day to book appointments by phone. You can’t get a cell phone without a bank account.

And you can’t get a bank account without registering with the bureau. So you use a pay phone. When you call for an appointment, they absolutely won’t give you one: you must come in and wait in line.

I think this is the formal form of schadenfreude.

Mandi arrived safely in Cologne, Germany, on Sunday morning after a long day of travel. Things went smoothly until the very end, when the power was out at the train station and she had to schlep her luggage up and down all the stairs without the aid of an escalator or an elevator (she’s really strong!). She is now busy at work with about a hundred and fifty other Fulbrighters in training and will continue to do so for the rest of the week.

Safe at the Hotel in Cologne

After Mandi left, I drove down to stay with my brother and his wife, Laura, and daughter, Erin. It has been fun visiting and hanging out with them, and I have also been able to tour Madison Chemical, which is where my brother works.

Check out the tour of the chemical plant on our Flickr album! 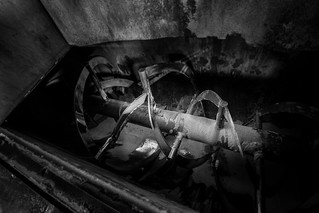 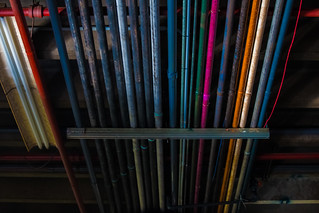